Nice to see a number of new members joining the Robertson’s Badge Club this month. For those who aren’t aware, there is a range of information available to collectors who wish to research the Robertson’s Golly Collecting hobby… the Golly Checklist is a handy printed reference which lists all known genuine Robertsons Golly badges and pendants with space to record your items, whilst the online Golly Guide is a subscription only service which records all genuine Robertson’s Golly items produced by the company over the years. There are thousands and thousands of items included, all in full colour with detailed notes and descriptions. Both of these items are only available from the official Golly Checklist shop (www.gollychecklist.co.uk/shop) and this Facebook group is where the Golly Checklist team make any official announcements or updates to this material.
Following the success of the first Golly Auction at the start of this year, February saw the second ever GOLLY AUCTION by the Golly Checklist team complete successfully. 100 badges were on offer this time and once again it was an opportunity for many collectors to add to their collections - often at very reasonable prices. Plenty of bargains were to be had including a Pointed Foot Jogger for £33 and a Bank It badge for less than £25. The Gomm Guitarist with the desirable ‘B’HAM ENGLAND’ backstamp sold well at £26 but the star of the show was one of the newly discovered ‘.R.’ backstamps on a White Waistcoat Standard which sold for £76.

The results of the auction will remain in the ‘Past Auctions’ section of the Golly Guide. Over time it is expected to be a useful resource to assist collectors with a guide to current prices.

As mentioned previously, we are in the trial phase of the Golly Auction and as such we are trying a few things out. In the last auction we updated the ‘Current Bids’ mid way through the auction so you can see how you are getting on. We have made this a permanent feature which will continue with the third auction which is currently underway. This third auction contains a selection of the general issue designs with many listed from only £1… the perfect opportunity for new collectors to make some additions… and as it is run by the Golly Checklist team you can guarantee that they are all genuine Robertson’s badges or your money back!
This third auction is open from 29-Feb-2020. Golly Guide subscribers get exclusive viewing for the first week and general viewing is available form 7-Mar-20. The auction concludes on 14th March at 1pm. As before, Golly Guide subscribers pay NIL% commission on all purchases.
When this auction is over we will be taking stock of how it went and looking at how to make the auction experience better for everyone. I will be asking for feedback once the auction completes.
—

February was a light month in terms of Golly Guide updates although we still managed to make three updates:

However it was not light on Research as we managed to issue or update SIX Research Notes covering:

++RN 1015 on the orientation and size of the backstamps on the F&S designs. More Research is needed here to establish exactly which designs these exist on.
++RN 1016 covering the famous DINGLEY standard and looks to establish the different backstamps used on this desirable badge as well as giving details on a likely new Die.
++RN 1017 covering a new backstamp which has been discovered on the '.R.' Standard
++RN 1018 covering the discovery of two shades of blue on the rare Miller RED bagpiper and gives evidence that this has been found in two independent collections
++RN 1019 covering the Gomm Scouts from the White Waistcoat era and suggests that a third Die exists.
++and finally RN 5003 covering the 1993/96 Ballerina which has been reported in a different size!

We have since received reports of a new F&S B’HAM backstamp and the possibility of a new W/W Hockey Die… further details of these will be covered in due course. There is still plenty out there to find!

Thanks to those collectors who continue to report in new finds and unusual variations, we continue to add these to the archives and this information will form the basis of future updates to the official Golly Checklist.

That's all for this month...

See you next month for another update! 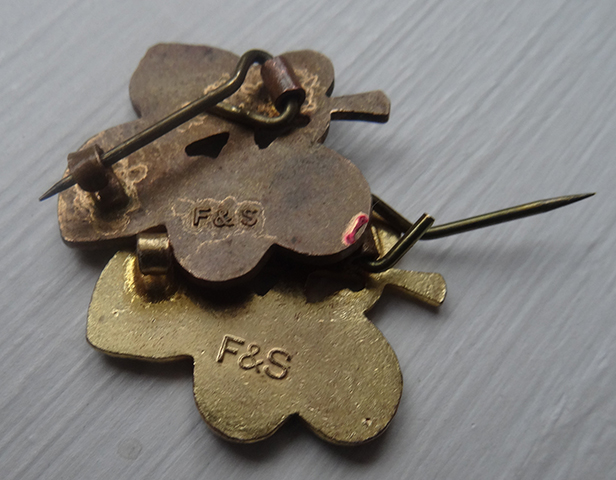